Ben, Ralphie have both earned Bronze certificates  Well done to you!

Who will get the next Gold?!

We have all worked on telling the time using analogue or digital clocks.  As we become confident with reading the clocks we then worked on time problems.

Following this we moved onto the measurement of length using standard measurement.

The children are at various stages with this topic.

Telling the time to the hour, half hour, quarter past and quarter to the hour.

Twenty four hour clock compared to AM and PM.

Year 2 - Children worked on number bonds for ten and twenty.  They have begun work on the 2,5,and 10 times tables.  This will lead onto related division facts.

Year 3 - Children have worked on learning the 3,4, and 8 times tables.  They will be solving mathematical problems using their multiplication knowledge.  They will begin to learn how to formally record multiplication and division calculations involving 2 digit numbers.

Year 4 - Children have continued to regularly work on all of the tables up to 12.  They are deepening their confidence with multiplying, dividing and formally recording calculations involving 2 and then 3 digits.  Formal division is taught using the 'bus stop' method.

Year 2 - children are learning to count forwards and back using a number line and deepening their grasp of addition and subtraction.

Year 3 - children are now using the column method to add and subtract and carrying numbers across the ones, tens and hundreds barrier.

Year 4 - children are learning to check their work with estimation and using the inverse operation.

We are now learning about addition and subtraction.

Year 2 - children are becoming confident with number bonds within 20.

Year 3 - children are learning how to add using the column method, partitioning numbers into hundreds, tens and ones.

Year 4 - children are extending their knowledge by adding and subtracting thousands, hundreds, tens and ones.

The current learning focus for all year groups is 'place value'

Below is an example of some of the lessons we have covered in Wrens during September.

Children working on the year 2 curriculum are revising counting in 5s and learning to count in steps of ten from any number.

They have also compared numbers to 30  using the words, 'greater than,  less than and equal to'.

Children following the year 3  curriculum have worked on ordering numbers to 1000, comparing numbers using the words; 'greater than, less than and equal to.'  This group have used the place value mat for hundreds, tens and one and have  begun work counting in steps of four.

Children working on the year 4 curriculum have worked on ordering numbers up to and beyond 1000.  They have used the place value mat for thousands, hundreds, tens and ones.  This group have worked on counting in steps of 6,7 and 9 giving reasons for word problems drawing on their existing knowledge. 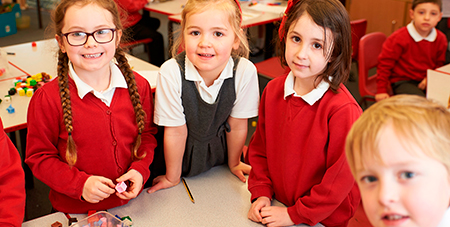