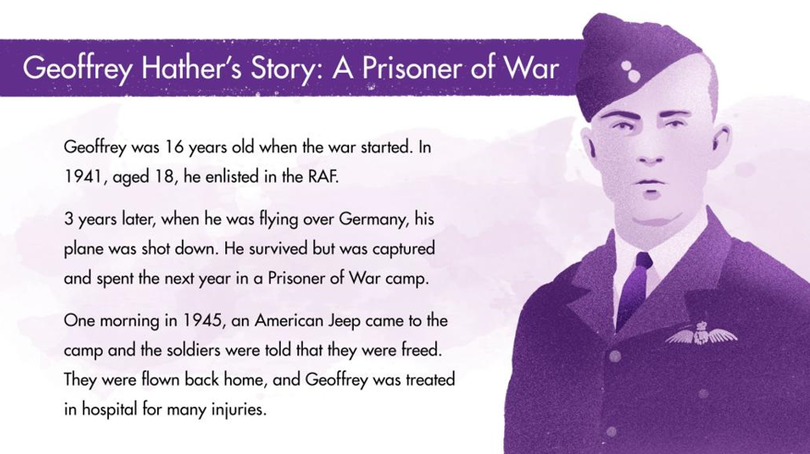 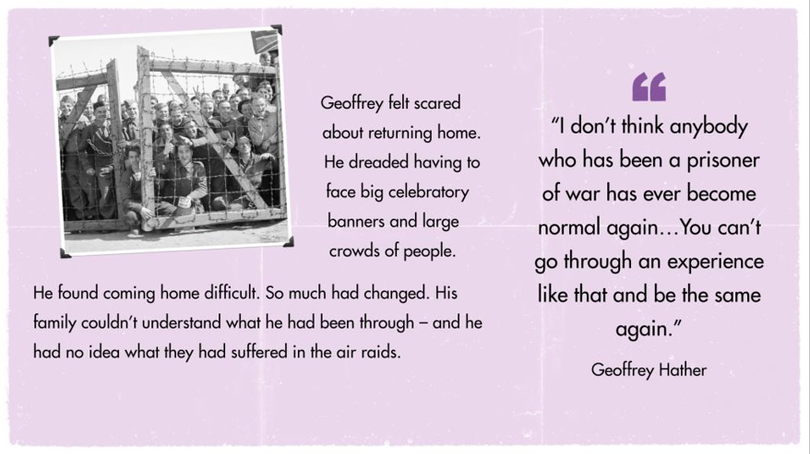 At this time, we remember those who have represented their country. Geoffrey Hather was a prisoner of war and returning home was hard for him at first.

You can hear an interview with Geoffrey on the Imperial War Museum website.

•3 years after joining the RAF, Geoffrey and his crew were flying over the Ruhr in Germany, and their aircraft was hit. As the fire took hold, the crew were ordered to bail out, but when the plane suddenly lurched to one side, Geoffrey fell without his parachute. Miraculously, he survived but was badly injured. He was treated in a Prisoner of War hospital. He recovered and then spent the next 9 months in a series of Prisoner of War camps for airmen.
•After being freed from the camp, the POWs were flown back to Leighton Buzzard, were deloused and given new uniform. They were then taken to hospital in Shropshire, examined and given leave.
•Geoffrey was in and out of hospital for eighteen months after being discharged in Jan 1947.
•He spent 6 weeks at a RAF rehabilitation centre where they were helped to settle back home. They were given a book which addressed various issues such as how to deal with returning home, having waited for it for so long and how to deal with people.
•It took Geoffrey a while to settle back into civilian life. When Geoffrey was on the train back to Birmingham, his face had healed but he still had a limp. He didn’t dread the reactions to his injuries as much as he dreaded arriving home to celebratory banners and a large crowd. He decided that if he looked down the street and there had been a banner welcoming him home, he would have just turned around and walked away.
•He described the first few weeks being home as “quite difficult” – Britain had changed so much.
•He had been used to being restricted in small compound with barbed wire and now he was home where he could open doors and go wherever he liked.