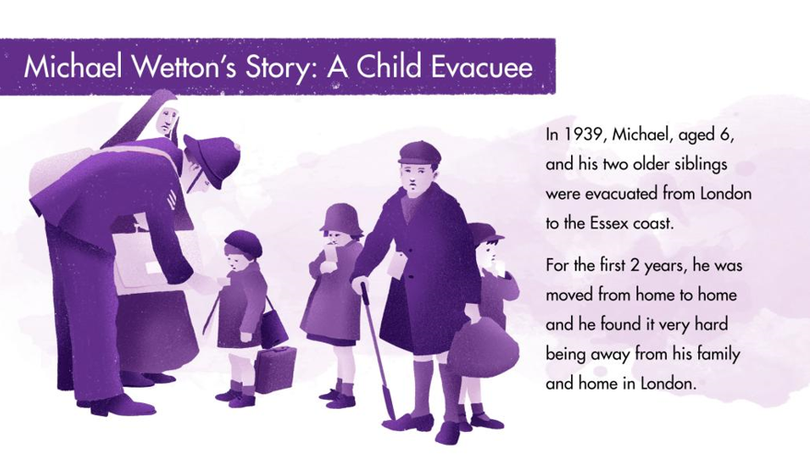 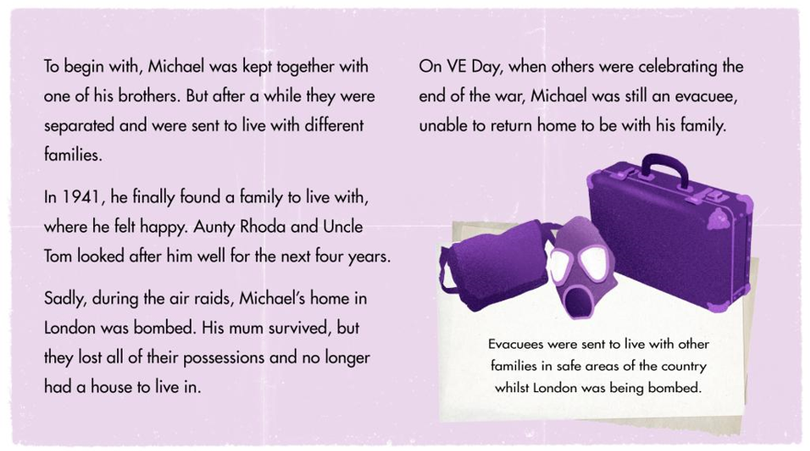 How can the experience of a child evacuee be an inspiration? Despite the difficulties he faced, how did Michael Wetton turn his experiences into a positive, to help other people?

Please visit the DB Primary forum to share your ideas and get involved in the discussion.

Michael was one of many children who were evacuated from London during the war. Evacuees were sent to live with other families in safe areas of the country whilst London was being bombed. Michael and his two older siblings left their home and their parents in 1939, and were sent to live near the Essex coast.

In 1944, many evacuees started to return home. However, in August 1944, Michael’s family home was hit by a Doodlebug (V1 rocket) and so his mother did not feel it was safe for them to come back. Then in January 1945, their house was hit again – this time it suffered a lot of damage. The front door was blown off and the water tank burst, flooding the house. Michael’s mother was at home but miraculously survived.  She was recued and taken to hospital before going to her parents house. Unfortunately, there was not enough room in Michael’s grandparent’s house for the whole family, so Michael and his siblings could not yet return home. The war was over, and Michael was now 12 years old. He had been away from his family for 6 years, and yet still could not return.

Michael's experience stayed with him forever, and throughout adulthood he dedicated himself to helping others. In 1953, he trained to be a teacher – and was for 30 years. He also supported charities like Save the Children and Shelter, which focus on helping children and the homeless.